Talk about excitement, their crowdfunding campaign raised over $525K. Their goal? $50K. People want this vibe.

Alexandra Fine and Janet Lieberman point to what they call a “pleasure gap” as their motivator for developing Eva. “In heterosexual couples, women are more than four times likelier to describe recent sex as unpleasurable,” according to the site.

“Orgasms and sex are some of the most beautiful experiences we have as humans,” said Fine. “It makes you happy, it decreases stress, it decreases heart attacks. It’s amazing. Women should be able to experience that enjoyably.” 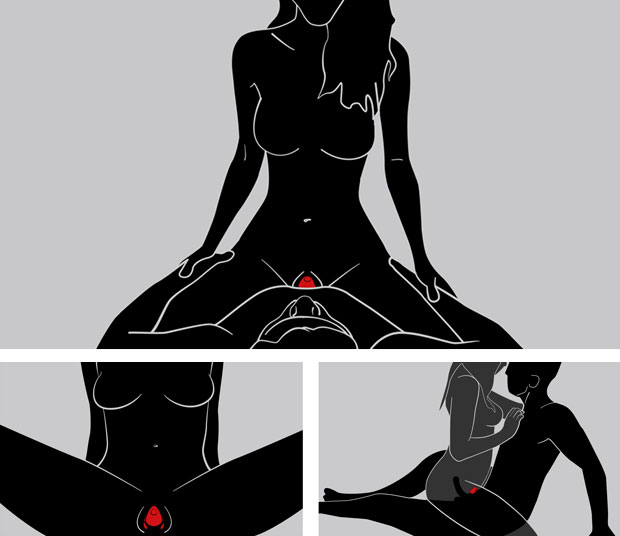 Their Indiegogo campaign page cites a statistic from the Kinsey Institute reporting that 70% of women need clitoral stimulation to have an orgasm. Although, as their site notes, there are some toys on the market (We-Vibe, we’re looking at you) that attempt to deliver that needed stimulation to the clitoris during sex, many of the designs are intrusive, distracting, and awkward. What makes the Eva different is that no part of it enters the vaginal canal, nor is it worn around the penis. Instead, using what look like spring-loaded “arms”, it is able to be tucked and held into place under the labia majora.

According to Fine, 30 women have beta tested Eva and have given mostly positive feedback. (You can watch testimonials at their site.) Though, the partners fully disclose that Eva is a “one size fits most” solution. “You have to make your own judgment call based on knowing what your body is like. But the women who have tried it have described it as comfortable and secure,” said Fine. “You need a labia to tuck it under.”

You can pre-order for May shipping via their Indiegogo page by contributing $95. After initial deliveries to crowdfunding contributors, the Eva will retail for $105.

We look forward to getting our hands on one of these for a test.

We use a minimal amount of cookies on our website in order to understand which content is most popular, ie. counting visitors and clicks. By clicking “Accept All”, you consent to the use of ALL the cookies. However, you may visit "Cookie Settings" to provide a controlled consent. Thank you for visiting!
Cookie SettingsAccept All
Manage consent

This website uses cookies to improve your experience while you navigate through the website. Out of these, the cookies that are categorized as necessary are stored on your browser as they are essential for the working of basic functionalities of the website. We also use third-party cookies that help us analyze and understand how you use this website. These cookies will be stored in your browser only with your consent. You also have the option to opt-out of these cookies. But opting out of some of these cookies may affect your browsing experience.
Necessary Always Enabled
Necessary cookies are absolutely essential for the website to function properly. These cookies ensure basic functionalities and security features of the website, anonymously.
Functional
Functional cookies help to perform certain functionalities like sharing the content of the website on social media platforms, collect feedbacks, and other third-party features.
Performance
Performance cookies are used to understand and analyze the key performance indexes of the website which helps in delivering a better user experience for the visitors.
Analytics
Analytical cookies are used to understand how visitors interact with the website. These cookies help provide information on metrics the number of visitors, bounce rate, traffic source, etc.
Advertisement
Advertisement cookies are used to provide visitors with relevant ads and marketing campaigns. These cookies track visitors across websites and collect information to provide customized ads.
Others
Other uncategorized cookies are those that are being analyzed and have not been classified into a category as yet.
SAVE & ACCEPT